In a vengeance retaliation, that is not new, after a new terrorist attack against a police patrol south of the city of Arich that led to the death of one officer and 14 soldiers, and in suicide bombing that led to the death of the attacker alongside with three policemen in the explosion of an explosive device in the “Darb Al-Ahmar” area, the day of February 20th, 2019 witnessed and for three hours the execution of 9 of the opposition youth: Ahmed Taha, AbouElkacem Ahmed, Ahmed Jamal Hejazi, Mahmoud AlAhmadi, AbouBakr Essayed, AbedrrahmanSouliman, Ahmed Mohamed, Ahmed MahrousSayyed, and Islam Mohamed that were convicted of involvement in the case of assassinating of the former Attorney General Hisham Barakat in June 2015.

The execution comes despite calls from human rights organizations including Amnesty International to stop the execution, with the defendants denying the charges against them and their relatives’ confirmation that the confessions were carried out under torture and coercion. The executions included the first execution of the son of a Muslim Brotherhood leader, Ahmed Taha, the son of Mohammed TahaWahdan, a member of the Muslim Brotherhood’s Guidance Office, which is the group’s top executive committee.

The Egyptian Court of Cassation ruled in December to support the death sentences of the nine defendants in the case of the killing of the former Attorney General. The court at the time commuted the death sentence on 6 defendants to life imprisonment, and the Cairo Criminal Court on 22 July 2017 ruled the execution of 28 people among the accused in the murder of Hisham Barakat, and sentenced 15 people to life imprisonment, 8 to 15 years in prison and 15 to 10 years in prison.

After the execution, the number of the opposition members executed in February rose to 15 after the Egyptian Interior Ministry executed six other opponents convicted in the killing of the son of the judge of the north of the country in an incident about a year ago and the killing of Major General Nabil Farajin Kerdasa west of Cairo. The number of opposition members executed since Sisi’s arrival in the summer of 2014 has reached 42, while 50 more are expected to carry out the same sentence after being sentenced to death on a number of issues.

Some statistics confirm that 2,532 death sentences have been approved in criminal and political cases since 2013 and more than 170 people have been executed from 2013 to 2018

On the other hand, the Egyptian authorities completely reject the permanent questioning of the validity of the death sentences, national and international human rights organizations consider it as “politicized”, according to previous official data. The authorities consider that the judiciary, both civil and military, is independent and impartial. The accused are subject to more than one degree of the justice process, rejecting any charges that undermine their independence.

DAAM Center reminds that those who agree today to the terms of the executions in this form and justifies recourse to it based on the fight against terrorism expects that the same unfair means will be used against them one day without respect for the principles of fair trial and human rights.

It also condemns this unjust implementation, which violates the right to life and all international conventions that protect the human being and his life, his dignity and the sanctity of his body.

DAAM Center notes that the Egyptian authorities should stop using the judicial authority, thus make citizens lose their trust in it. They should stop the illusion of considering that these executions are a form of revenge for victims of terrorist operations. , The battle against terrorism is the battle of all Egyptians and cannot be won by engaging in battles that have nothing to do with the real perpetrators.

DAAM  emphasizes that the continuation of the judiciary in the destruction of the rights of the accused and the guarantees of fair trials will lead to further death sentences and imprisonment without any real evidence and become irrelevant in the face of social awareness as a whole which is no longer regarded as a form of punishment.

DAAM  considers that this execution is a crime not only against those young men and their families but also against Egypt and the international community.

It also appeals human rights defenders in Egypt and the world to more fighting against the spread of this unjust punishment, which is opposite to the human rights system in one of its most obvious which is the right to life. 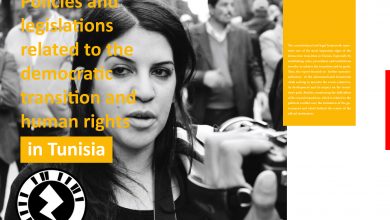 Egypt: A hand that offers reconciliation and a hand that continues to torture