At a time when the President of the Republic was breaking the fast with representatives of national forces who are loyal to his policies, the group of the national movement, formed before the last presidential elections which includes parties and prominent political figures that represent an important part of the Egyptian opposition, were breaking the fast in a Ramadan gathering that does not represent a political meeting or conference, but rather an ordinary social occasion.

It seems that even the simplest gatherings are no longer allowed in Egypt. As soon as the national movement group’s “Iftar” began, they were surprised by a power outage. A group of bandits raided the Swiss club headquarters, where the “Iftar” was held, attacked the attendants, broke down the place, threw food and furniture at them while chanting “Long live Egypt” , “Down go traitors, agents, and spies”. This caused the injury of Mr.Farid Zahran, head of the Egyptian Democratic Party, Mr. Khaled Daoud, former head of the Constitution Party, Mr. Ahmed Fawzi lawyer and jurists, and Mr. Abdel-Azim Hammad, former editor of Al-Ahram, in addition to other injuries to the attendants that suffered various bruises and injuries as well as moral intimidation.

The group that carried out the attack left without being caught. All this happened in a total absence of security despite that the incident occurred close from Imbaba police station and the Court of North Giza. When the victims contacted the police, the rescue came after more than an hour of the incident and refused to note down a police report on the incident under the pretext of the escape of the perpetrators, ignoring their main task of protecting citizens.

On Wednesday morning, some of the pro-regime news websites published a fabricated story according to unidentified eyewitnesses. The source said that the quarrel took place after clashes between the members of the movement and started a dispute over the organization of the tables which ended with a fight and some body guards hired by members of the movement intervened and sided with one party of the quarrel.

It should be noted that members of the National Movement are under legal accountability because of a statement they issued calling for boycotting the presidential elections after the violations that occurred to the candidates. This violence comes on the night of the trial of the candidate withdrawing from the elections “Khalid Ali” because of a fabricated malicious charge against him.

DAAM Center notes that this incident, which although it represents a new development in the use of violence by the regime in the face of civil forces, is no different from the context of continuing violent practices inherited from the previous regimes that the Egyptian people revolted against.

DAAM Center also stresses that this path represents a further repression of peaceful change movements and carries a strong message to all democratic groups not to allow anyone not only to participate in Egyptian political life without fully subscribing to the current regime but also to live a normal life for whoever tries to establish any form of peaceful opposition, which opens the door to extremist groups to attract more elements that could not find an outlet in democratic ways.

DAAM Center also calls on the Attorney General, the Egyptian judiciary, the Minister of Interior, and the Executive authority to take urgent investigative measures to hold the perpetrators of this infringement accountable. There is no difference in the rights of citizenship between supporters or opponents of the political system.

DAAM Center stresses the need for the current Egyptian political system to review the way they are dealing with the official opposition. The center also stresses that it is not possible to continue deal with them with a purely security sense.

Aerial bombardment of al-Farnaj area in Tripoli: These crimes have no statute of limitations

Press release Bill No. 49 of 2015 on reconciliation in the administrative field is an unconstitutional law. 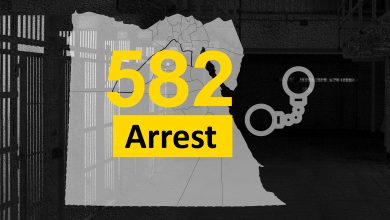 With names and statements, we monitor all the incidents of arrest against 582 persons due to commemorating the first anniversary of September 20 demonstrations

Mass trials and specific targets No to criminalize youth movements