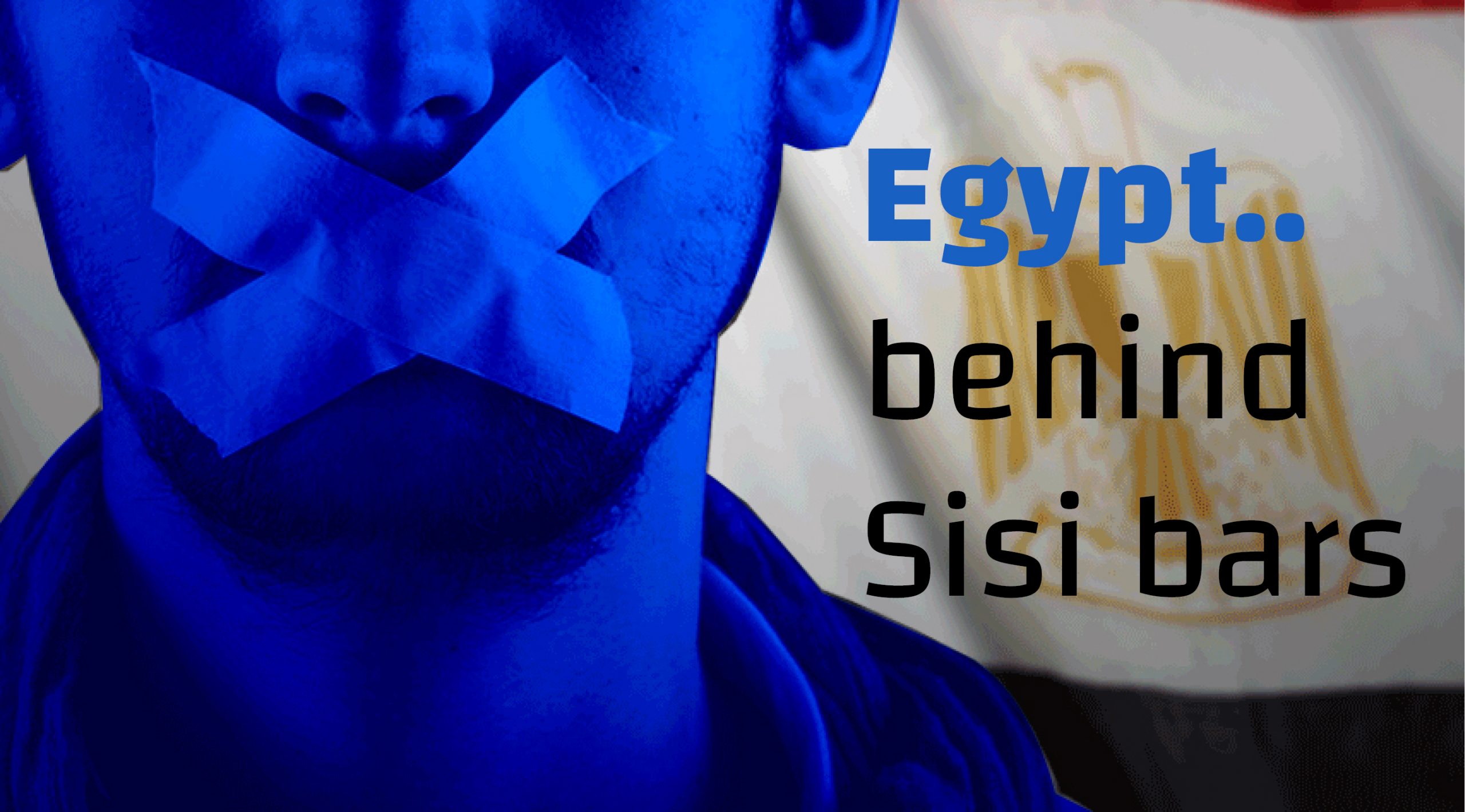 This report covers a period of six months from January to June 2020. The monitoring methodology is based on counting the arrests on political grounds in Egypt which are multiple and recurrent cases under the current repressive political regime. The regime tends to obscure information concerning the incidents of arrest, but the activists of the Egyptian civil society are dedicated to ensuring the right of the Egyptian citizen and the international community in accessing such sensitive and important  information as per the rights of detainees and preventing violations as much as possible.

It can be said that the violations of human rights in Egypt are an orchestrated policy of  security and judicial institutions. The regime’s media also supports that policy with fallacies and rumors trying to cover up the violations and deny their existence.

It should be noted that the numbers mentioned in the report do not represent the total number of detainees during a certain period of time against the background of the same facts, but are   considered as instantaneous rather than continuous events.  Given that the incidents of arrest of persons issued in absentia sentences are not included since  it is of a very wide range, and not enough data is available. The report also did not include any cases related to the North Sinai Governorate, except for those who were brought before the High State Security Prosecution (HSSP) Taking into account the repetition of the names of the accused or arrested more than once. It should be noted that the numbers of the counting were based on facts quoted from specific sources, in the following order of priority: (Official sources / human rights sources / media sources / family sources)

The general framework The methodology of monitoring and archive regarding this report:

In the context of the report, the case of “arrest and accusation on political grounds” was defined as every security movement (detention or arrest) or judicial action (accusation of arrest and summons) against persons on a political basis. What is meant by a political background here is incidents related directly to the public affairs and they are in three main sections, which are:

Important clarifications regarding the methodology of the report and criteria for including cases:

The report is considered an initial counting and its main purpose is to show the detailed and internal  contexts and patterns of the incidents, their data and elements. The report may not fully express the actual total cases according to the same specified criteria. “Zero” number in the report doesn’t mean that there are no other cases in a certain time and place.

The report relied mainly on secondary sources, which were not directly verified from their primary sources, but the credibility of the source was taken into account and information was verified from multiple sources.

The elements of the sources relied upon to build the report are divided as follows:

The "main source type for incident approval" is divided as follows:

The place of incidents

There are two separated geographic scopes:

The geographic scope was divided as the following

The background to the incident was divided as follows:

One of the problems is that many cases are not based on a specific and clear incident, so the report relied on the following order to determine the type of activity:

The type of activity was divided as the following:

The incidents of arrest on the background of sporting activity contain several subdivisions which are:

“A state security issue": They are the people who are brought before the Supreme State Security Prosecution, on a political basis, without knowing the specific accusations against them.

'Party activity': The incidents that have been charged on the background of partisan activity, and contain several subdivisions, namely:

The type of the body that consider lawsuit was divided to the following:

The legal status for person was divided to the following:

In general, this counting covers more than 90% of the arrested persons who were brought before the Supreme State Prosecution (this is clear from many proofs). As for Public Prosecution, information is unclear especially in certain governorates such as Damietta and Kafr El Sheikh.

Regarding the State Security Prosecution, the continuation of pretrial detention was confirmed for 967 persons, while 933 persons were released. In addition, the legal situation for 3602 defendants wasn’t confirmed as a person wasn’t recorded as an arrested person without confirming the last renewal of his detention before the date of December 31. Even if it was evidently confirmed that his detention continues, except that if this information cannot be reached, he is recorded as unknown.

Regarding the accusations, 43% of the charges are counted. This is due to the fact that accusations are not recorded except in the case of mentioning an accurate source of accusations, even though in a governorate like Ash Sharqia more than 98% of detainees are charged with joining the  Muslim Brotherhood Movement and possessing leaflets. However, rarely None of the sources mention the accusations, and basic information such as accusations cannot be assumed even if they are implicitly confirmed. Therefore, they are not recorded and the  monitored number of incidents of arrest in Ash Sharqia is 2472 persons which is 27.5% of the total number.

Since 70% of the incidents are related to accusations of joining, publishing and other accusations which are not related to specific incidents, the statistics are based on the province of residence.

Not every repetition in the incidents of arrest for the same person is an enlistment in new cases without actually releasing him, because there are people who are actually released then they are arrested and brought again before either to the Public Prosecution or the State Security Prosecution

It is clear that the jurisdiction of the Supreme State Prosecution is in certain geographical regions which are Cairo, the Canal, Northern Sinai, Upper Egypt and Alexandria. On the other hand, the jurisdiction of the Public Prosecution is in Delta, Al Qalyubia, Beheira and the rest of governorates but under the direct supervision of the Supreme State Security Prosecution (SSSP) which may request the case file in order to investigate in, especially that all these case files are recorded with a number in the State Security Counting.

There is a weakness in data on the governorates of Kafr El Sheikh, Damietta, Ismailia and Upper Egypt due to the lack of news about them and the fear of lawyers from writing regarding investigations and cases in which they attend.

% 0
From facts done through security raids

During 2020, 8,961 incidents of security or judicial action were recorded against persons on a political background in all governorates of the Republic, except for North Sinai, through 145 police departments, cities and Marakiz (the second-level, beneath and within governorates) The number is divided between 8802 cases of “arrest” and referral to the prosecution, and 159 cases of “arrest and then dismissed from the minutes” or “no minutes was actually made”, knowing that all cases in which no information was reached about whether they were excluded from this inventory The case has been presented to the prosecution or was dismissed without making a report. 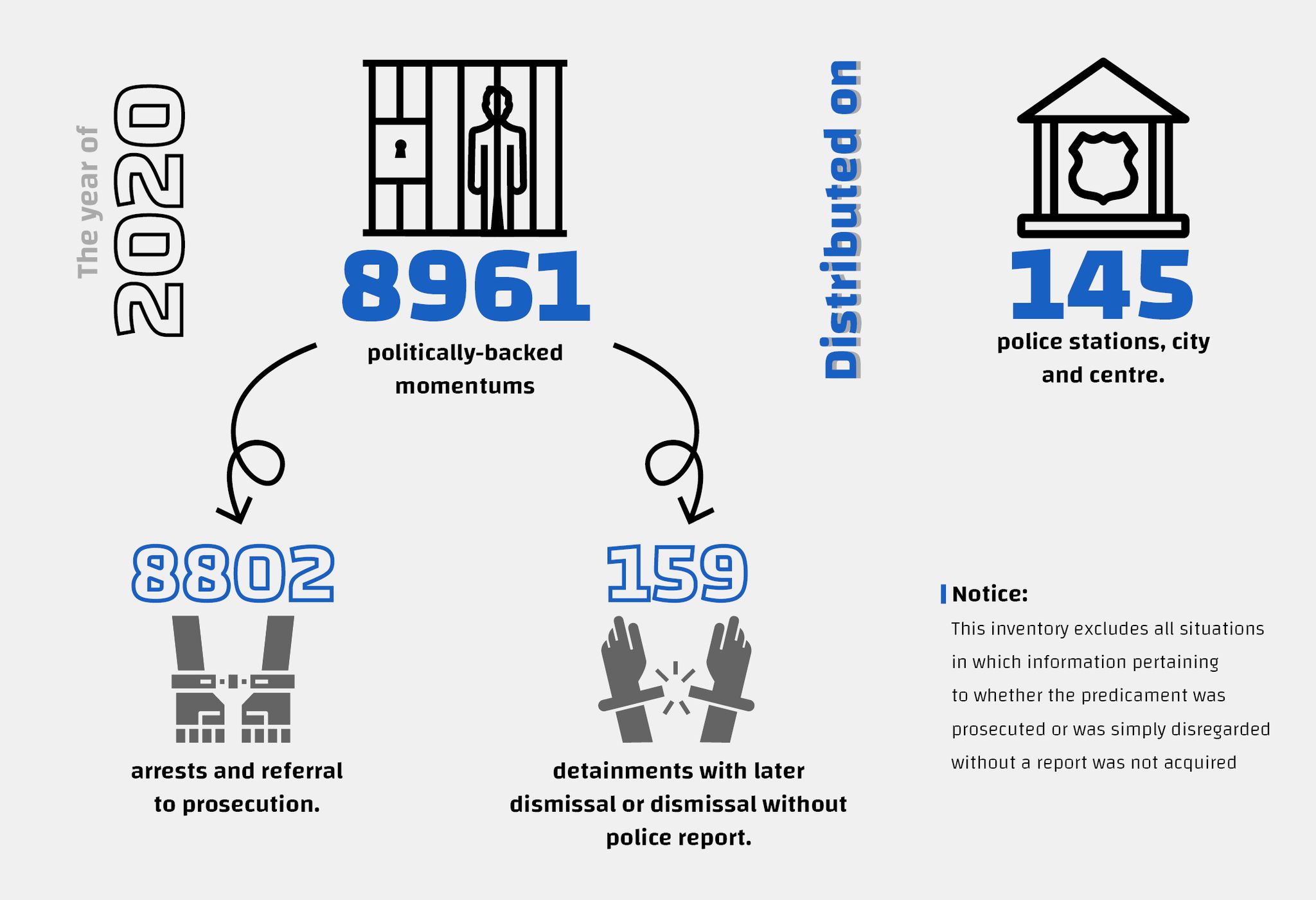 Nota bene It should be noted that the numbers mentioned in the report do not represent the total number of detainees during a certain period of time against the background of the same facts, but rather are considered an instantaneous event and not continuous, and given that the incidents of arrest of persons issued in absentia sentences are not included Because it is a very wide range, and not enough data is available. The report also did not include any cases related to the North Sinai Governorate, except for those who were brought before the Supreme State Security Prosecution (SSSP) Taking into account the repetition of the names of persons accused or arrested more than once. It should be noted that the numbers of the counting were based on facts quoted from specific sources, in the following order of priority: (Official sources / human rights sources / media sources / family sources)

3,676 people have been monitored with available case numbers. This represents 41% of the total number of those who were counted and detained in connection with 231 different cases, including 77 cases belonging to the High State Security Prosecution. In addition to the 5284 whose case numbers could not be reached. 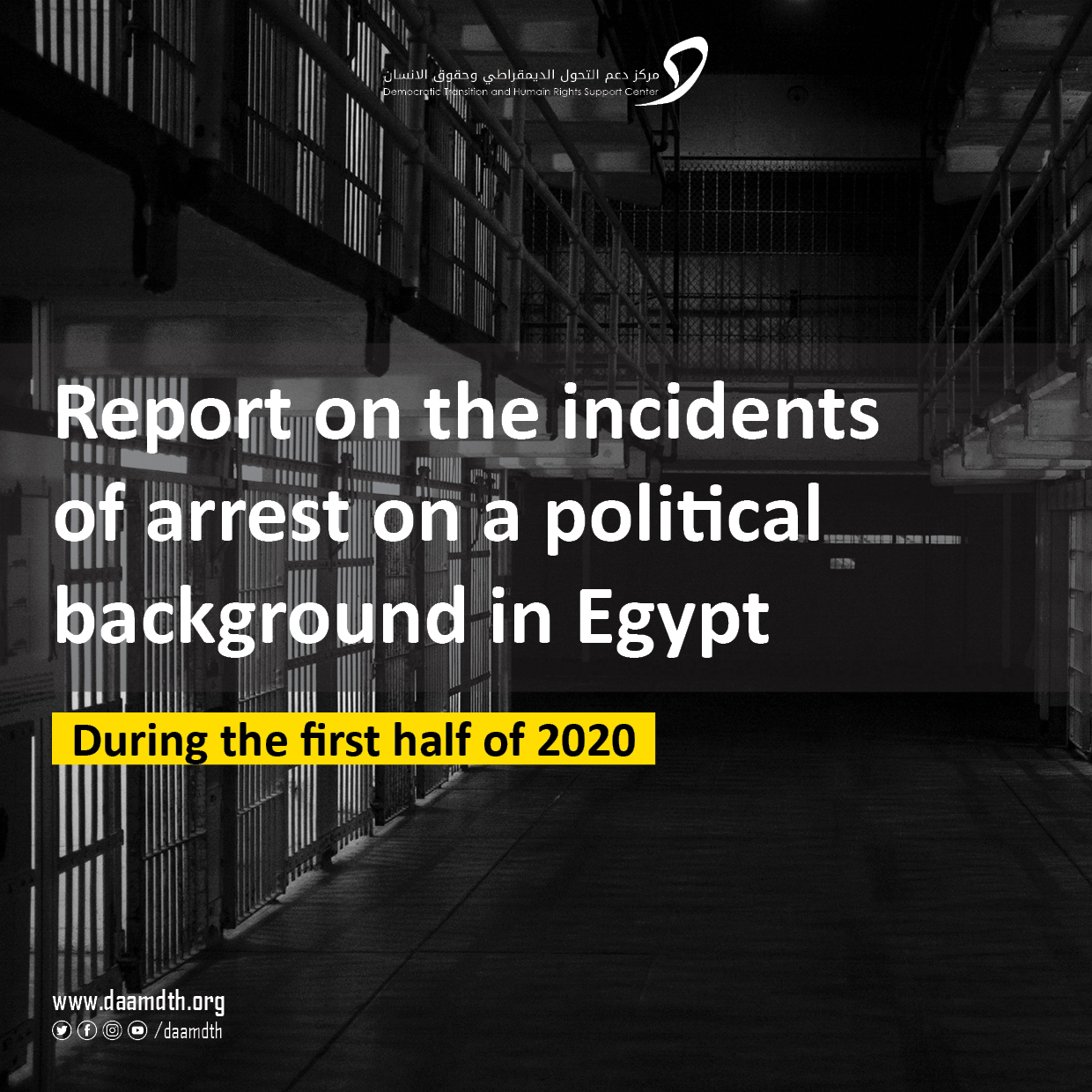 This report covers a period of six months from January to June 2020. The monitoring methodology is based on counting the arrests on political grounds in Egypt, which are multiple and frequent cases under the current repressive political regime. The

The three largest cases containing accused persons,  are by the following order:

0
accused persons
Nota bene Noting that this is not the total number of detainees pending any of these cases, but rather the total of what could be counted and documented only.

As for the background of the incident

Distribution of arrest and detention per district 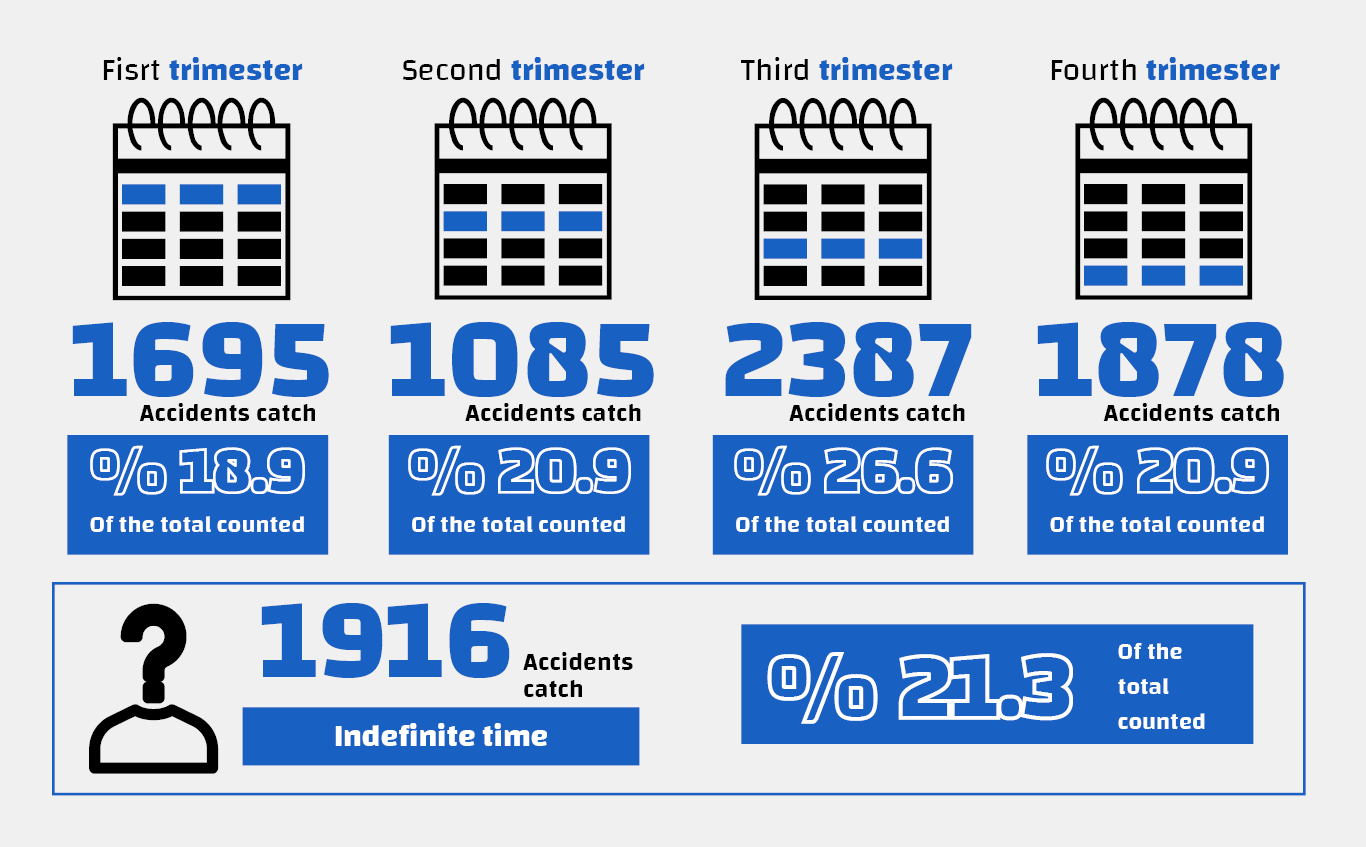 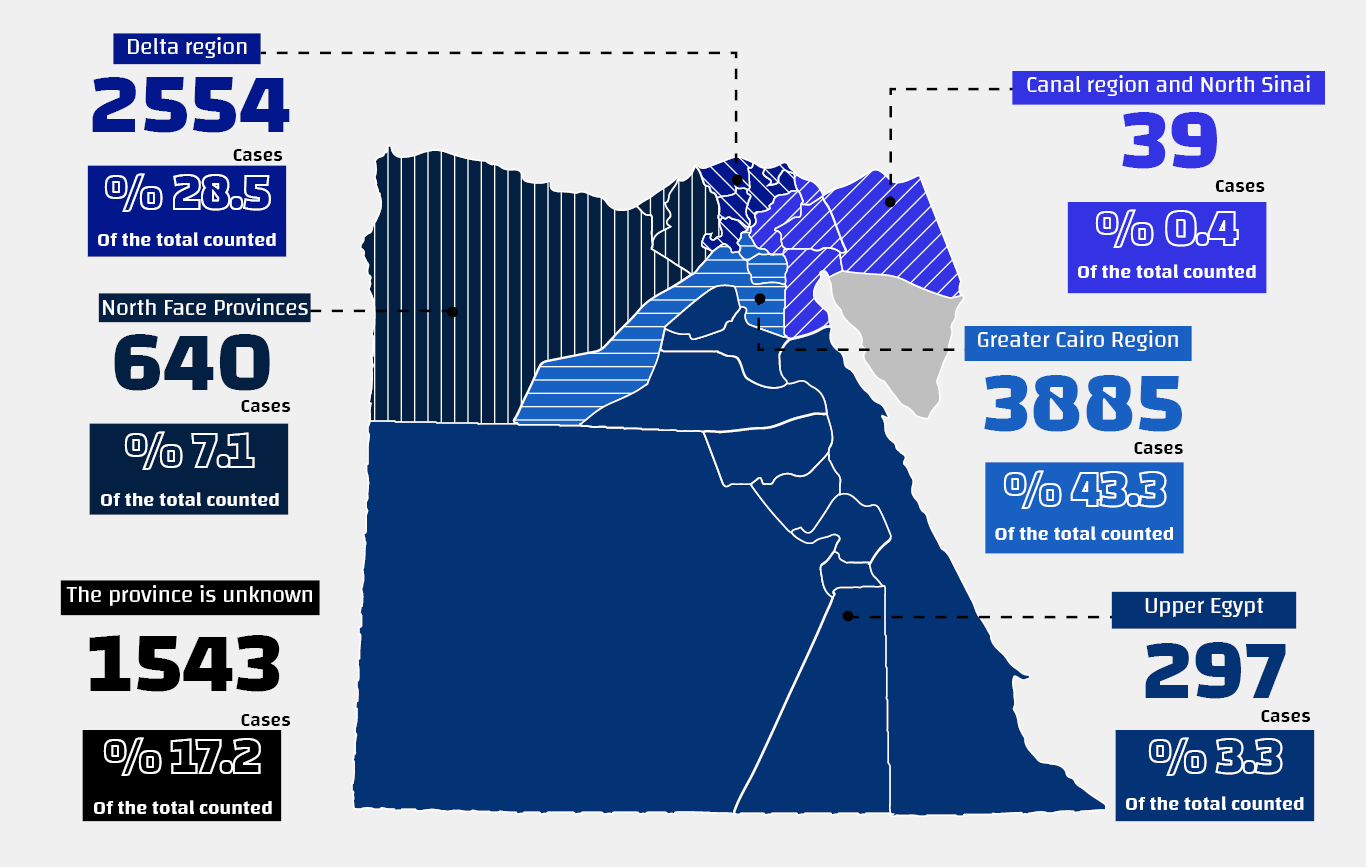 Note Noting that all incidents of presented before the State Security Prosecution, which were not related to a specific accusation incident within the Cairo region, were considered. 880 Cases and 960 of 2020 are a supreme state security inventory. They were classified according to the governorate in which the arrest took place, because the incident extended across different governorates.

As for the charges, the charges against 3875 persons were counted, representing 43.2%, and this included:

Charges related to joining an entity, whether a terrorist group or a banned group, etc., or promoting ideas or financing any of those groups to 3723 people. In addition to charges related to electronic publishing to 3033 persons and accusations of demonstrating or gathering to 2440 persons, in addition to  331 persons who have been charged for  possession or promotion of publications and prints.

Taking into account that usually two or more of the aforementioned accusations are directed.

As the accusations related to, whether a terrorist group or a banned group, etc. or promoting ideas or financing any of these groups were associated with the charges related to electronic publishing against 3021 persons.

The previous accusations were also associated with charges related to demonstrating or gathering 2301 times.

As for jobs, according to the most prominent professions that a number of their members have been arrested, the most monitored group by order, 100 teachers, 71 engineers, 63 workers, 58 lawyers, 39 doctors and 32 journalists, in addition to 14 researchers.

Also, the arrest of 12 faculties members was monitored. 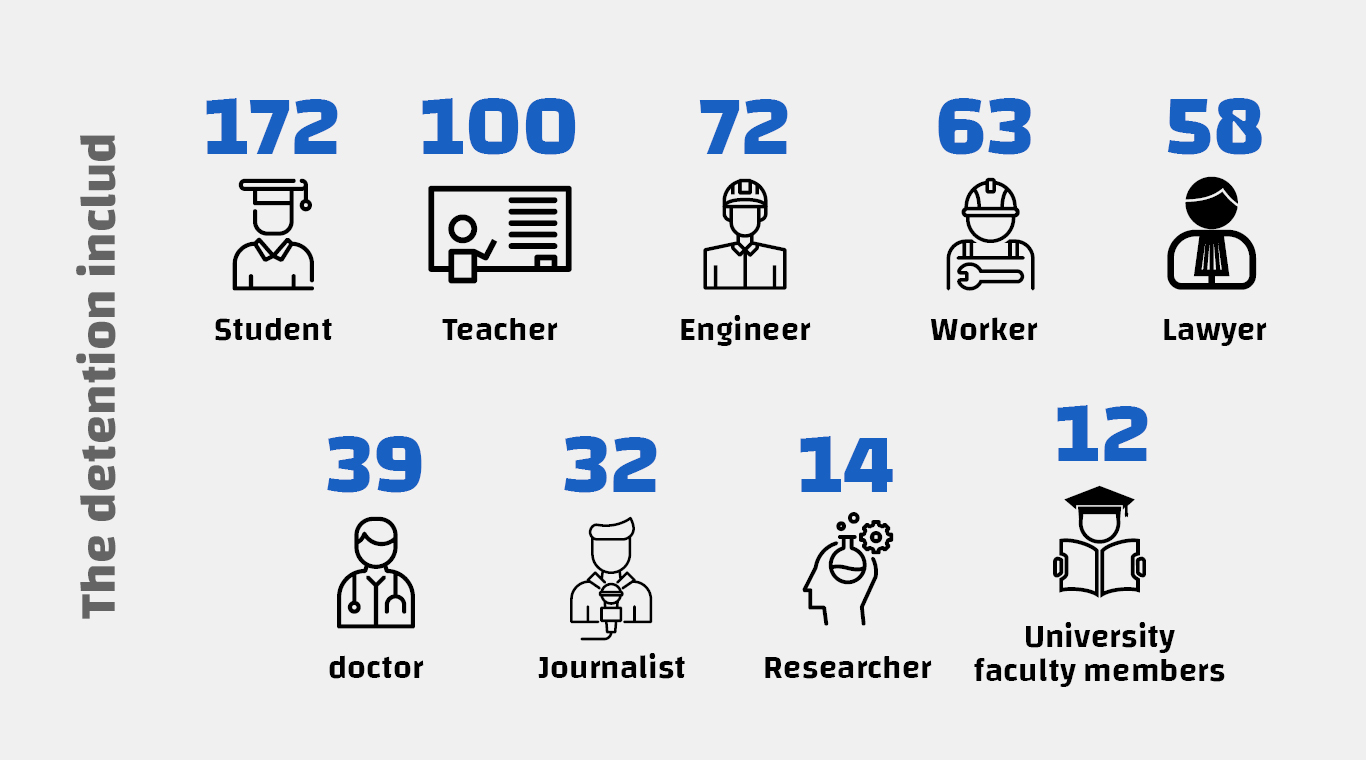 Statistical presentation according to the investigation authorities

735 final release decisions and 199 persons with precautionary measures were recorded, in addition to the confirmation of continuing the imprisonment of 967 persons and three deaths. There are 3601 accused persons with uncertain legal status.

Among the release decisions, 10 were a release on bail with a total of EGP 385,000. Even though three persons were referred for substantive trial among the persons who were brought before the High State Security Prosecution. 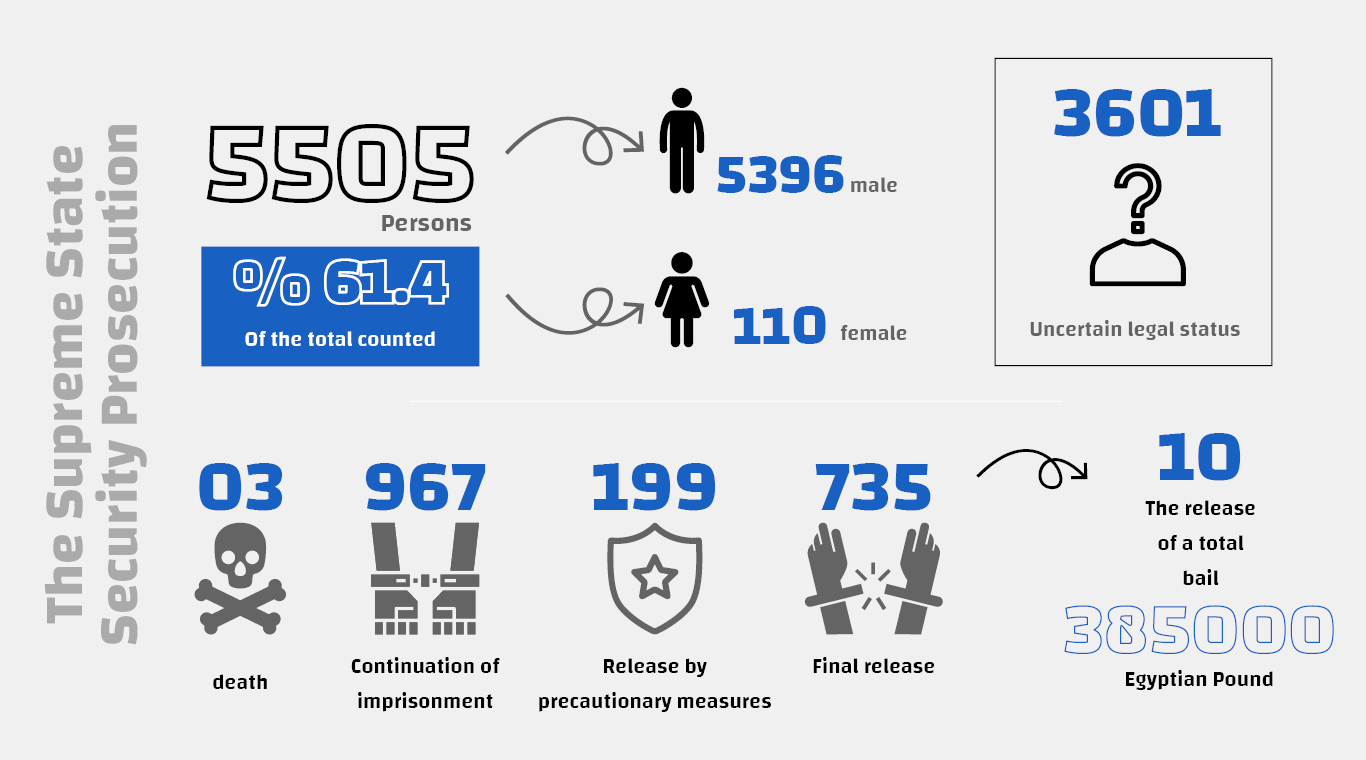 The number of those persons who were brought before the Public Prosecution office during the reporting period was 3,287. Representing 36.6% of the total number of those who were counted, including 13 females and 1713 males

The release decisions were monitored against 758 persons, and 58 of them were referred for trial.

The issuance of bail release decisions against 511 people, with a total of 2,426,000 Egyptian pounds, in addition to 284 persons whose detention is confirmed to be continued, and there are 726 persons whose legal status is unknown. And 15 deaths. 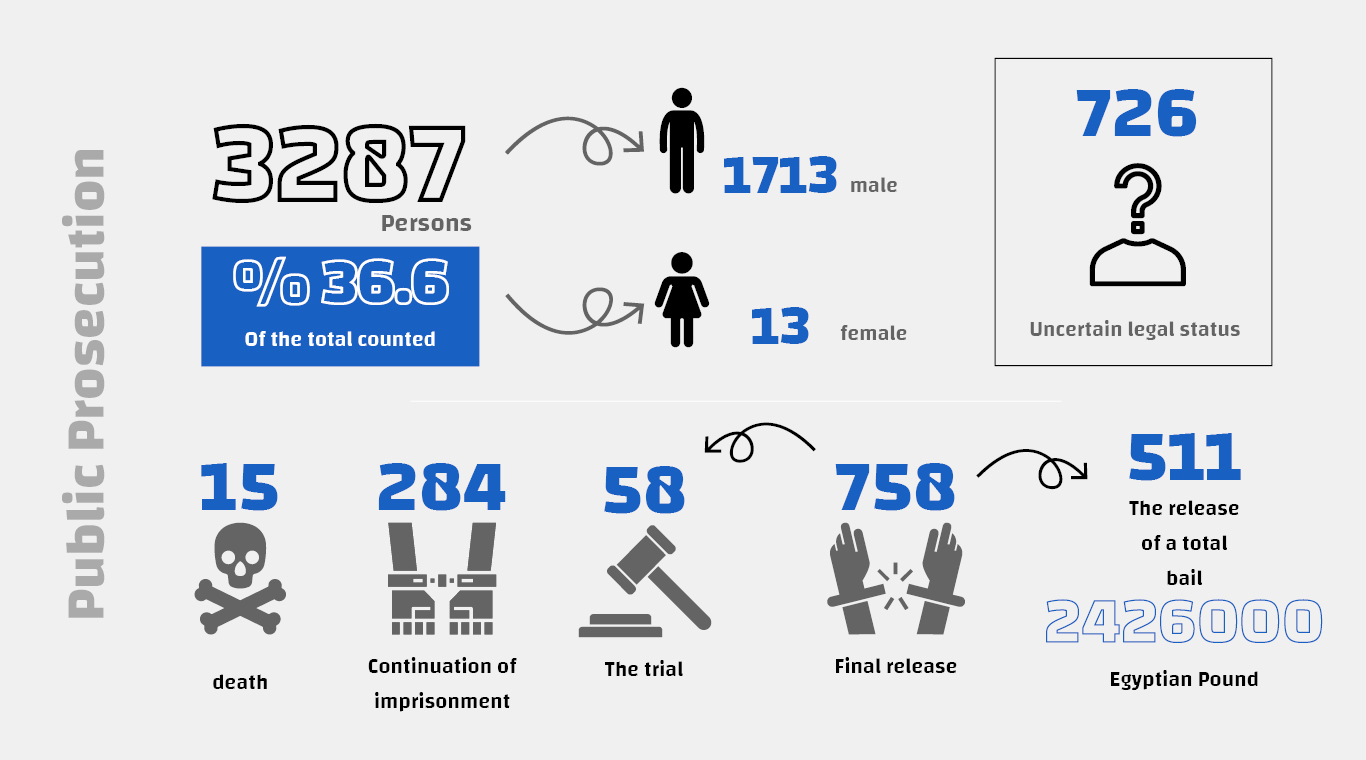 The number of those who were referred to criminal courts reached 128 persons, to the Criminal Court, the Emergency Supreme State Security Services, where 62 persons were acquitted, 53 were found guilty, and the cases of 13 persons had not yet been decided.

The cases of 298 persons are still on trial and we don’t know the judgment of 278. In addition,the  discontinuance of a legal action for 3 persons pending the recusation request. 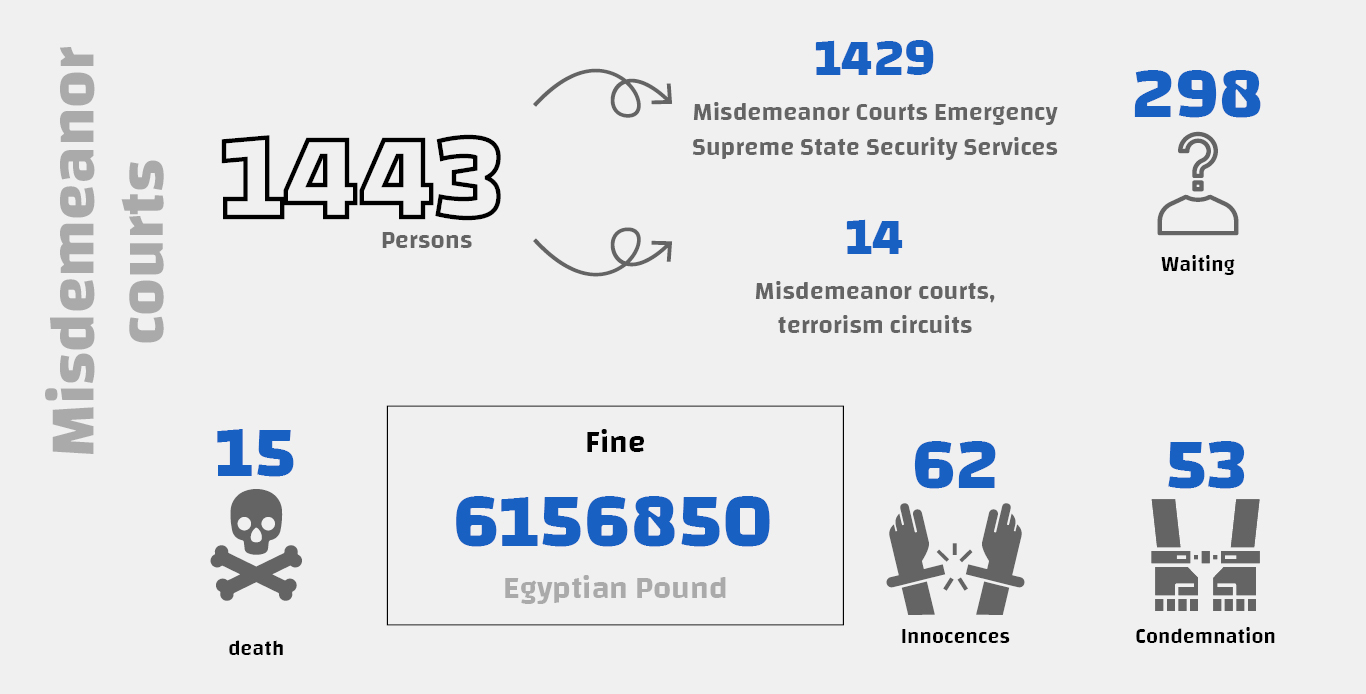