The Organizations and personalities signatories of this statement received with great discomfort the news of detention and deportation of the Tunisian academician and writer Dr. Amel Grami on Sunday January 3, 2016 by the Egyptian security authorities at Cairo International Airport. Dr. Grami, who travelled to Egypt upon an official invitation from the Library of Alexandria to deliver a presentation at the International Conference to Combat Extremism, was detained for more than 16 hours before starting the deportation proceedings without disclosing the reasons behind her detention.

During Dr. Amel Grami’s interview to get more details concerning her denied entry to Egypt, airport detention and deportation to Tunisia, she expressed shock at Egyptian authorities treatment and insistence on denying her entry to Egypt considering her thus as dangerous to public security. Dr. Amel Grami expressed a strong disgruntlement with the ill-treatment from the security authorities at Cairo airport despite her prior multiple visits to Egypt for work with various Egyptian academies and journalism institutions.

Dr. Grami spoke about her detention under tough conditions and confirmed during the interview that she was placed in an office in front of the detention room where there were three security officers as well as a certain number of detainees. The security officers kept smoking and insisting on closing the office door without taking into account her health conditions despite the notification she made about her sensitiveness when exposed to smoking and repeatedly begged to open the door as she almost fainted. There were also attempts to force her to sit for long hours despite her health condition which requires movement for back relief. Moreover, no meal was provided during her detention, that lasted over 16 hours, except for access to a cafeteria located at Cairo International Airport. Dr. Grami also had her personal computer and mobile phone withdrawn after allowing her to make a final call she insisted to make to inform the Library of Alexandria (the organizer) she was denied entry to the country. The latter sent her a security official who tried to identify the detention reasons and assured her that it is just a misunderstanding and that she’ll be quickly leaving the airport. However, despite his attempts and numerous calls, he told her that they have to wait until the following day to call high officials at the Ministry of Interior, which Dr. Grami rejected and insisted to return to Tunisia.

She also confirmed that she was interrogated five times during her detention by security officers who asked the same questions about the reason for the visit and her presentation topic on which she provided them with exhaustive answers each time.

Dr. Grami stated in a message that this violation does not represent Egypt’s cultural and civilizational and historical value, instilled by the Egyptian people, the intellectuals and academicians at local and international levels and sent her greetings for all the free voices and minds that supported her in this ordeal. She maintained that such attitudes are a real test for the policies of nations and their relationships and the reality of their respect for the rule of law and human rights in a pragmatic and practical way beyond any slogans.

The Organizations and personalities signatories of this statement express their full support to Dr. Amel Grami, condemn this flagrant violation of human rights and call on the Egyptian authorities and the Egyptian Ministries of Interior and Foreign Affairs to provide explanation along with due apology for such an ill-treatment that constitutes a violation to the rule of law and human rights. 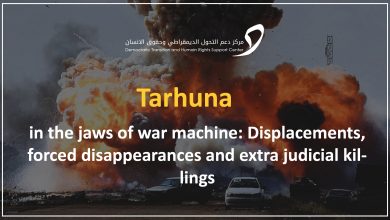